Bharat: Salman Khan’s crazy fan has the most special Eid gift for his idol, check out

Salman Khan is all set to treat his fans with another blockbuster called Bharat along with Bollywood diva Katrina Kaif.

Salman Khan is all set to treat his fans with another blockbuster called Bharat along with Bollywood diva Katrina Kaif. There is no denying that the actor enjoys a huge fan base and people even worship him. Every year Salman Khan manages to give Eid gift to his fans by releasing his pictures and this time, even fans are ready to go an extra mile for their idol. A fan of Salman Khan has planned the best Eid git for his favourite celebrity Salman Khan by booking the entire theater of his upcoming film Bharat for the first day first show.

Salman Khan’s fan named Ashish Singhal from Nashik has booked an entire theatre for Bharat‘s first day first show to enjoy the film of his ‘Bhai’. Ashish is not the only one who has acted like this but there is a group of people in Nepal who have done the same. Salman Khan’s Fanclub in Nepal has booked the entire cinema hall for Bharat’s first day first show. Just when the actor announced that the advance booking of the film has begun, the fans made sure that they get the entire hall to themselves. Such is the craze of Salman Khan! 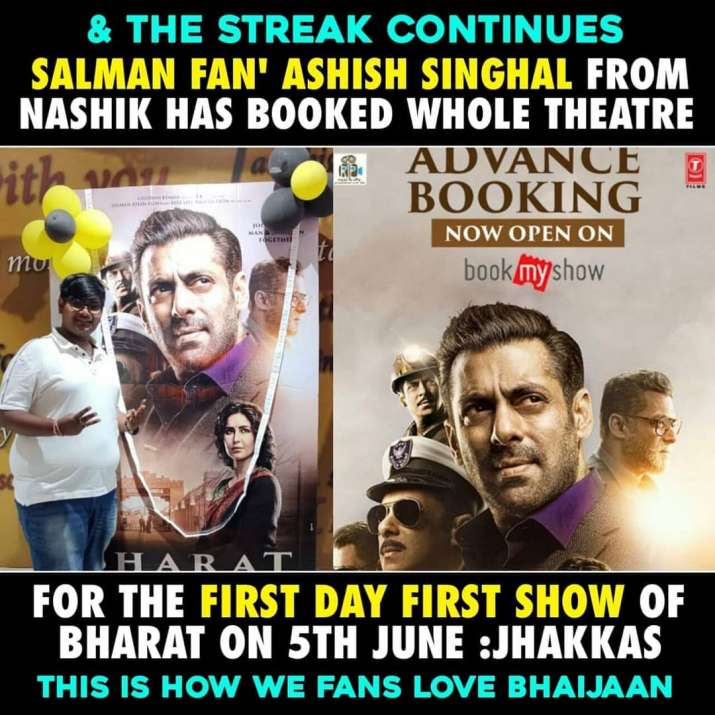 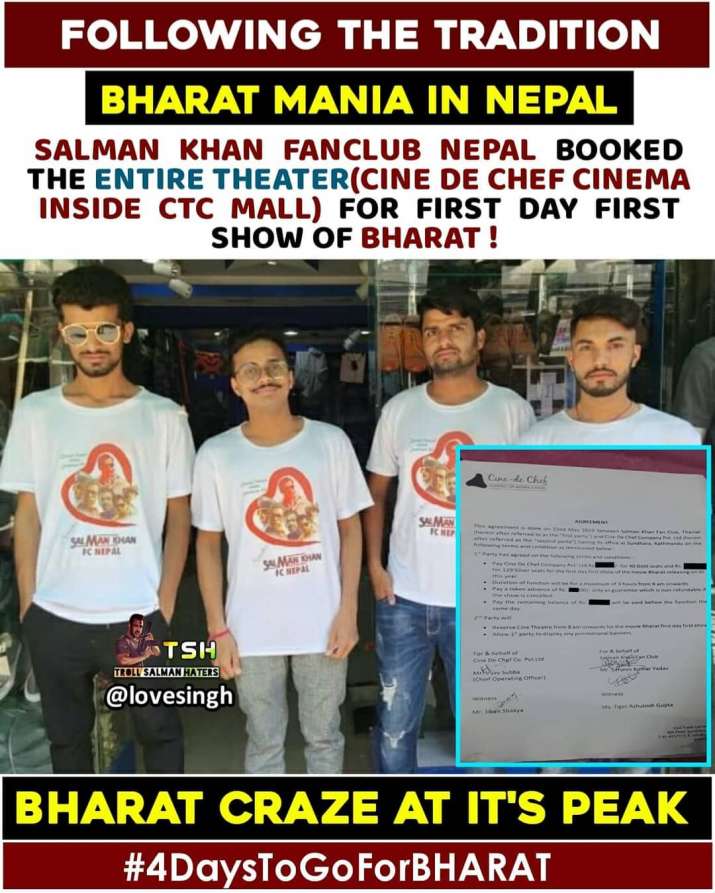 Off late, Salman Khan and Katrina Kaif have been busy promoting their movie, Bharat. The duo has promoted the film on various platforms and has spilled many interesting things about their character as well as the film. Talking about her role, Katrina said, “It’s so strong and unusual. I was happy that he wrote the film with someone else in mind, as certain nuances of the person seep into the writing unknowingly. And, since Kumud was written for someone else, it ended up being unlike anything I have done before. Personally, it was a challenge to immerse me into it and give it my all.”

Salman Khan’s Bharat also stars Sunil Grover, Nora Fatehi, Tabu and Jackie Shroff. The movie is an official adaptation of a South Korean movie Ode To My Father. Directed by Ali Abbas Zafar, the film will hit the theaters on June 5.