Janhvi Kapoor’s father Boney Kapoor is also aware of her addiction for workout and decided to tease her today.

The budding actress Janhvi is a fitness freak and ahead of her Bollywood debut she often used to be in headlines due to her workout pics. Janhvi can still be seen turning heads for her regular fitness routine. She is also said to be obsessed with workout and can often be captured returning from her gym session.

And it seems, Janhvi’s father Boney is also aware of her addiction for workout and decided to tease her today. Janhvi in her Instagram story today shared a screenshot of her WhatsApp conversation with her father.

In the conversation, Boney sent an article to Janhvi which read as, "Do you suffer from exercise addiction?" In reply to which Janhvi sent him a face palm emoji. This cute conversation of father and daughter duo is really interesting and drawing attention of fans on social media. 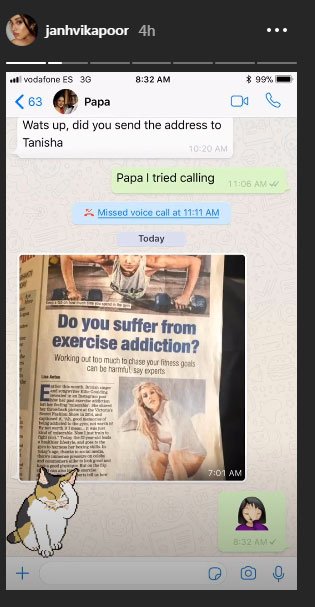 On the work front, Janhvi will be next seen in a biopic which is based on first female IAF pilot, Gunjan Saxena. Recently, few pics of Janhvi from the film sets got leaked. Meanwhile, Janhvi will also be seen in Karan Johar’s next film titled Takht. Apart from Janhvi, the film also features Kareena Kapoor Khan, Ranveer Singh, Anil Kapoor, Alia Bhatt, Vicky Kaushal and Bhumi Pednekar in pivotal roles.