Hina Khan posted a selfie with Nick Jonas and Priyanka Chopra, writing a heartfelt note for PC, as she invites the former to a party.

Hina Khan has grabbed all the world's attention for walking to the Cannes Film Festival 2019 with all grace and confidence. Not just Hina Khan marked her debut at Cannes but Priyanka Chopra Jonas too made it to the Cannes for the first time ever. PC Jonas is known for her elegance, her stardom and the way she inspires millions of fellow women. What happened in an after party of Cannes will surely make you feel humble towards the 'Desi' Girl of Bollywood.

Hina Khan was invited personally by Priyanka Chopra for after party celebrations. As Hina Khan made to the party, Priyanka Chopra made her feel home and introduced to many ace personalities. Feeling acknowledged, Hina Khan expresses her gratitude towards her in a long note or letter. Here's what Hina Khan wrote, as she took to her social media account.

"An unexpected invitation by a world star.. personally, after I gained consciousness and prepared my self to finally make it, I was still an outsider but only until you arrived. You didn’t need to, but still never left my hand for a second, introduced me to the people I probably wouldn’t have met and I felt as if all the achievements of my little career happening in fast forward as you present me as a star to each one of them."

Adding to the same, she wrote, "You somehow know everything ..as you mentioned my debut film and praised me for my hard work and appreciated me for the risks I have taken in my choices. Yes I have taken risks and I am still taking them, whr I almost have everything in my television career ..position,power,money everything.. But someone has to start somewhere I believe..."

"With my first debut film called LINES, I am trying hard very hard to erase the lines created between talents and mediums And coming back to @priyankachopra your inclusiveness surpasses my ability of comprehension. Your deliberate attempt to lift up people around you not for their backgrounds but their talent is one of a kind. You are a walking inspiration! "

Singing in all praises of Priyanka Chopra, Hina Khan conculded her note writing, "When a human being is a personification of an idea of self belief, Grace , humility, substance, and greatness, that person can only be you, Priyanka Chopra

You are already the best version of my dream self in the future I want and I believe thousands of others like me do too.
This is the Priyanka Chopra who believes in lifting others and growing together you are a sweetheart" 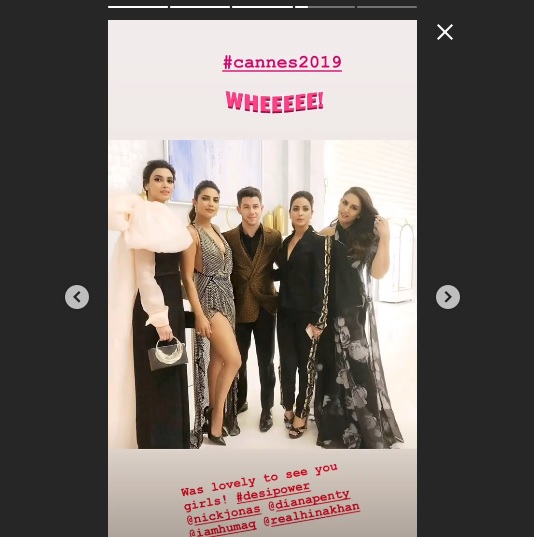 Hina Khan is all set to make her first debut in Bollywood with the movie Lines. She praises Priyanka Chopra for all her warmth and love. Not just this, Hina Khan expresses her sincere attitude to Priyanka for the immense support and encouragement the later brings along.

Hina Khan has been seen as an epitome of style and glamour at Cannes 2019. She is appreciated for the right choice of outfits and the sheen look on her face. In fact, Priyanka Chopra looked as glamorous as ever alongside husband Nick Jonas.