Popular singer Neeti Mohan is all set tie the knot with long-time boyfriend Nihar Pandya. Ahead of the big fat wedding, the pre-wedding ceremonies are making noise on the social media. On February 14, the couple had their Mehendi ceremony which was attended by their close friend and Bollywood actor Ayushmann Khurrana. The actor was accompanied by his wife Tahira Kashyap and brother Aparshakti Khurrana. He took to his Instagram to share the inside pictures from the ceremony. 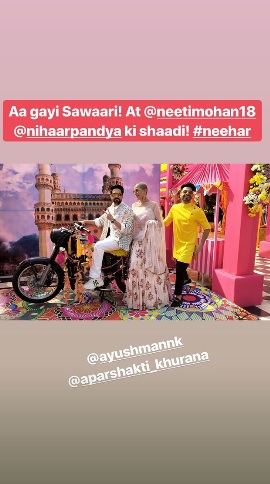 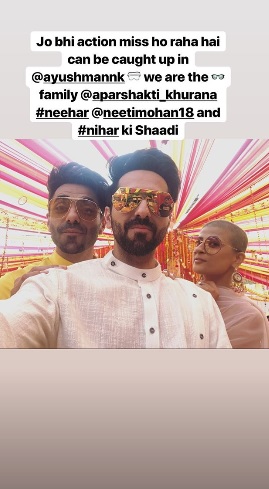 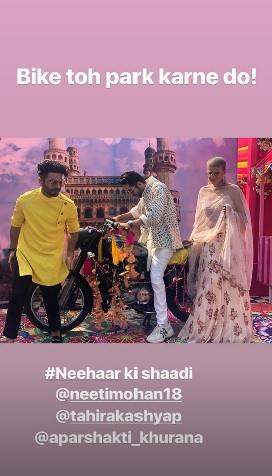 Apart from Ayushmann and Tahira, cricketer Robin Uthappa was also present at the ceremony. The ceremonies took place in Hyderabad at Taj Falaknuma Palace.

On Thursday, Neeti Mohan shared a picture with her fiancé Nihar Pandya on oscial media. The couple appeared on The Kapil Sharma Show along with the Mohan sisters. They announced their wedding on the show and even spilled beans on how they two met and clicked.

Nihar Pandya told on the show, “A friend of mine was a member of Aasma, the band that Neeti was a part of at the beginning of her career. I asked him several times to introduce us but that never happened. Coincidentally, I met her in Goa at the same friend’s wedding almost a year ago, and that’s when our love story started."

Talking to India Today, Neeti Mohan said, “We both have strong values and quite similar ones. I think Jimmy [former member of Aasma band] knew that, and trust me, he was very sure that we would click. He introduced us at a wedding, where Nihar was accompanied by his parents. They met me very warmly and there was an instant connect with not just Nihar but also his family members."

The nuptials are scheduled to take place today in Hyderabad.