Sonam Kapoor Ahuja is one Bollywood actress who other than acting is synonymous to vogue and fashion. The actress just never fails to amaze us with her oh-so-hot fashion statements. Forget about the fans but husband Anand Ahuja also can’t stop gushing about the Neerja actress when brings her A-game to the forefront. This time again, Sonam Kapoor gave us a reason to stare at her endlessly when she reached Goa for a celebration along with sister Rhea Kapoor.

Sonam Kapoor took to her Instagram to share a sultry picture of herself from the celebrations and captioned it as, "Ready to celebrate Goa style." In the picture, the actress is seen posing for a gorgeous selfie wearing a tangerine colored dress with a plunging neckline. She rounded her look with a statement neckpiece and sneakers from VegNonVeg brand owned by her husband Annad Ahuja. Check out her picture here-

The moment Sonam shared this picture on social media, she was showered with praises and compliments but it was husband Anand Ahuja’s compliment that stole away all the limelight. Looking at the picture Anand Ahuja’s reaction was to say "Hottiee”. Check it out here- 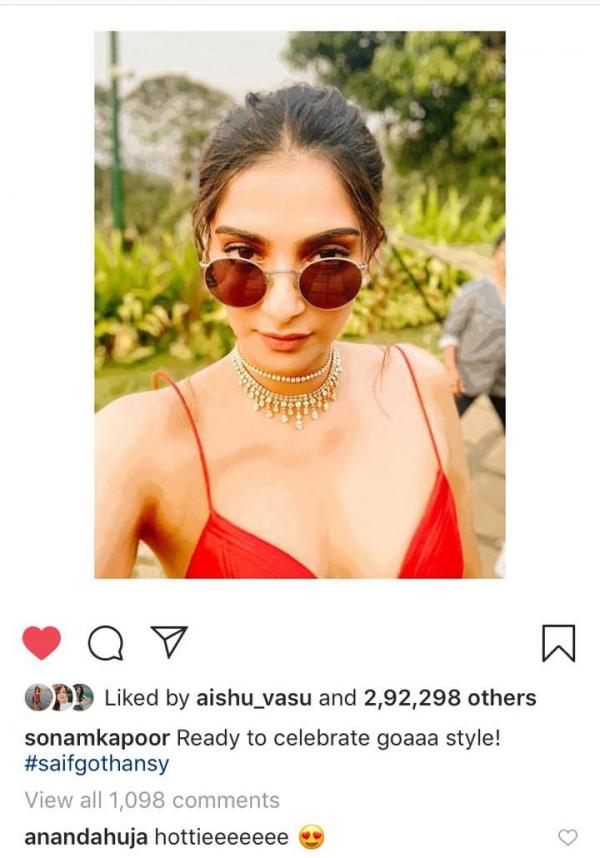 Not just Sonam but sister Rhea Kapoor slayed like a queen at the wedding in Goa as well. Rhea was also seen in a Dhruv Kapoor’s outfit just like Sonam and posed in full swag for the picture. Even she paired her outfit with matching VegNonVeg sneakers. Rhea captioned the image as “Just out here for wedding season waiting to wear some SHAADI sneakers and diamonds like..” Check out-

Recently, the Kapoors managed to take out time to enjoy some moments with each other and flew away to Bali. Sassiest Kapoor of all, Anil Kapoor took to Instagram to share a beautiful picture of family brunch on his social media in which all were dressed in shades of white. ''A happy Sunday with the only humans that make me feel all warm and fuzzy inside... Celebrating yet another beautiful love story!'' he captioned. Here are more pictures from their vacation in Bali.

First day of the year. 📸 @samyuktanair

Happy happy new year guys. This year has been so beautiful. Have had three releases ( Padman, veere and sanju) got married to the most wonderful man in the world and moved into our first home together. I’m truly blessed with the best family and friends a girl can have. Ever grateful and ever thankful.. all my love... ☮️ 2018 you were wonderful! And 2019 I’m looking forward to you!

A happy Sunday with the only humans that make me feel all warm and fuzzy inside... Celebrating yet another beautiful love story! @kapoor.sunita @anandahuja @sonamkapoor @rheakapoor @karanboolani @harshvardhankapoor

On the work front, Sonam Kapoor will be seen sharing screen space with father Anil Kapoor for the first time in their next film Ek Ladki Ko Dekha Toh Aisa Laga. The trailer of the film has already hit the internet an dis much appreciated.