More than 10 hours after his account was hacked, Amitabh Bachchan returned to the micro-blogging site and his first tweet gives a befitting response to what happened.

After Bollywood superstar Amitabh Bachchan’s Twitter account got hacked last night, fans went into a frenzy on social media. However, the actor has returned to the micro-blogging site and his first tweet gives a befitting response to what happened. Big B took to his Twitter and shared a phrase that read, “Express not just in words the existence of one ; not everyone has the capability to say what they understand and feel " ~ ab”

"express not just in words the existence of one ; not everyone has the capability to say what they understand and feel " ~ ab pic.twitter.com/HuyBdpTD7j

Soon after his first tweet, fans rejoiced and welcomed him back on Twitter. Just when a user welcomed him with an empowering quote and good morning wish, Big B treated him with his golden words and wrote, "जी जीवन का यही सत्य है ; स्वीकार करो अशुधता से परे उसका बहिष्कार करो"

On late Monday night, 'pro-Pakistan' Turkish hacker group, Ayyildiz Tim hacked Bollywood superstar Amitabh Bachchan’s Twitter account and started tweeting against the country. Their first tweet from Big B’s account read, "This is an important call to the whole world! We do condemn the irrespective behaviors of Iceland republic towards Turkish footballers. We speak softly but carry a big stick and inform you about the big Cyber attack here. As Ayyildiz Tim Turkish Cyber Armny +++" This raised a storm on the internet with fans reacting to it from all directions. 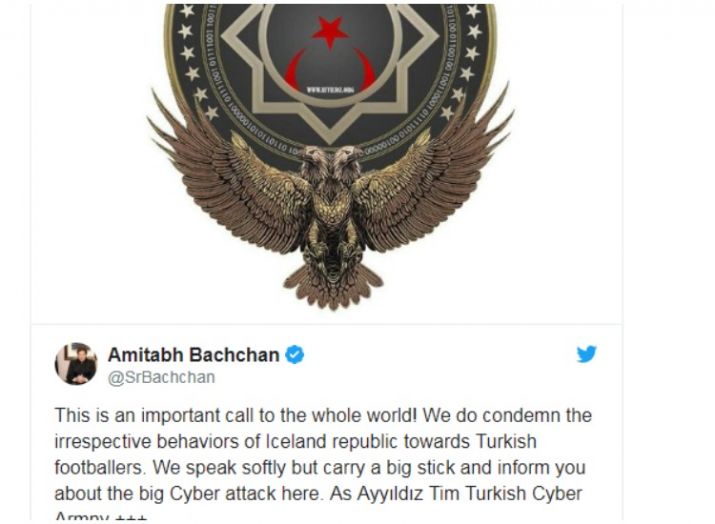 Even the display picture was changed to Pakistan's Prime Minister Imran Khan's picture. The Bollywood superstar, who regularly takes to Twitter to stay connected with his fans has a staggering 37.4 million followers on the social networking site.

A Mumbai Police spokesperson told PTI that they have informed the cyber unit and the matter is being investigated. The cover photo of Bachchan's account, which was subsequently deleted, showed the promo picture of the group with an eagle in flight.

On the related note, the same group had previously hacked Twitter accounts of actors Shahid Kapoor and Anupam Kher among others.