Aamir Khan's daughter Ira Khan has been in the limelight time and again for sharing pictures with rumored boyfriend Mishaal Kirpalani on her Instagram.

Aamir Khan's daughter Ira Khan has been in the limelight time and again for sharing pictures with rumored boyfriend Mishaal Kirpalani on her Instagram. While the star kid has never really cared about what people would say and shared what she felt comfortable in posting on her social media, she has always been under scrutiny when it comes to her relationship status. Now, the star kid has finally cleared all the confusion and confirmed that she is dating Mishaal Kirpalani in the cutest way possible.

Ira Khan asked her fans and followers for questions they want to ask her in an ‘Ask Me’ session on Instagram. From her personal life to her interests in filmmaking, the divas uncovered it all. When one user asked her if she is dating anybody, Ira shared a picture with boyfriend Mishal Kirpalani in which she can be seen hugging him and tagged him in the story as well. If this doesn’t confirm that Ira is dating Mishal then what will. Check out her answer here- 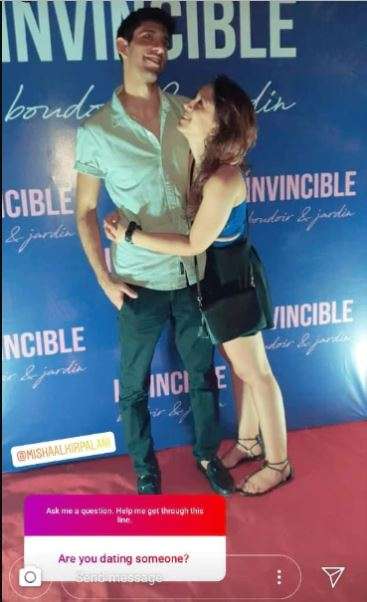 Ira often breaks the internet as she keeps sharing pictures with Mishaal on her social media. Mishaal also keeps posting pictures with Ira. On Ira’s birthday he won many hearts with his wish and wrote, "happy birthday babe. You’re simple. You get happy with a birthday post. For my birthday I want to binge watch Netflix together....just about 140 million hours of content. #netflix."

🥳 happy birthday babe❤️❤️. You’re simple. You get happy with a birthday post. For my birthday I want to binge watch Netflix together....just about 140 million hours of content.😘 #netflix

During the Ask Me session, Ira also revealed that she is currently in Dharamshala and enjoying her vacation there. When asked about the movie she is currently watching, the star kid revealed she is watching Lucifer these days and tries to watch atleast one movie a day. Talkinga bout her Bollywood plans and career, Aamir Khan earlier revealed on Karan Johar’s Koffee With Karan, "I'm not quite sure what she has in mind but I suspect that she likes the world of cinema and filmmaking. So maybe that's where she would want to go, I don't know."

On the other hand, talking about son Junaid, he told, "When Junaid said that he wanted to go and train as an actor, the first thing I said was, 'Look, you should follow your heart and do what you want. But when the time comes for you to take your first step as an actor, if I feel that you are not good enough, I will tell you that on your face and I won't actively do anything to support you.' Because that will be unfair for the film and it will be unfair for the audience. If you're good, then you'll get opportunities. Perhaps from me, perhaps from others. That goes for Ira as well," he said.