On Shahid Kapoor's 39th birthday, IndiaTV Recommends 'Kaminey' -- for the bundle of unbridled talent he is, for 'Dhan Te Nan', and for his mentor Vishal Bharadwaj's craft (IMDb rating: 7.4).

There's a scene just before the interval of 'Kaminey' where one of the protagonists -- Guddu, mistaken to be the other -- Charlie, is detained by inspectors Lobo (Shiv Kumar Subramaniam) and Lele (Hrishikesh Joshi). Guddu and Charlie, both brilliantly played by Shahid Kapoor, are identical twins, and share a pertinent issue apart from their face -- a speech defect. While Guddu stammers, Charlie has a lisp -- he pronounces "S" as "F". So Shahid becomes Fahid -- literally and figuratively, because the brilliance with which the actor has played both roles, it's hard to say they are not different.

Guddu cannot speak fluently. But can sing. So, in this sequence, the inspectors make him sing -- a besura song, but what a melodious performance by Shahid! The thrill, the comic relief and the drama -- the scene is what makes Shahid stand out among his peers.

There's this thing with Shahid -- he's one of the best actors of his generation, and yet when it comes to multi-crore movies, he has not registered a phenomenal success per se. What he has instead scored is registering his name in the list of most phenomenal actors the Hindi film industry has seen. Take for example, a 'Jab We Met', where the understated performance as Aditya makes him stand tall in front of Kareena Kapoor's Geet. Or 'Haider', where he shines despite the looming presence of actors like Kay Kay Menon, Tabu and Irrfan. In 'Udta Punjab', you don't see Shahid -- it's Tommy Singh all the way.

But what really changed everyone's perception towards this erstwhile chocolate boy of Indian cinema image is his Guddu, Charlie and just the concoction of these starkly opposite characters in a crime caper -- flawlessly prepared by him.

'Kaminey', conceived by Vishal Bharadwaj, is full of moments that spoke of the synergy he shared with Shahid. It is a highly unconventional double role for Shahid -- wherein the actor in him is exploited to the brim.

Vishal Bharadwaj, on the face of it, gives the average cinegoer a fast-paced crime caper -- intercepted with twists at every turn. Underneath it all, 'Kaminey' is a story of two estranged brothers -- Guddu and Charlie who hate the sight of each other due to their diametrically opposite philosophies of life -- brought together by a stroke of luck in a very dramatic turn of events. 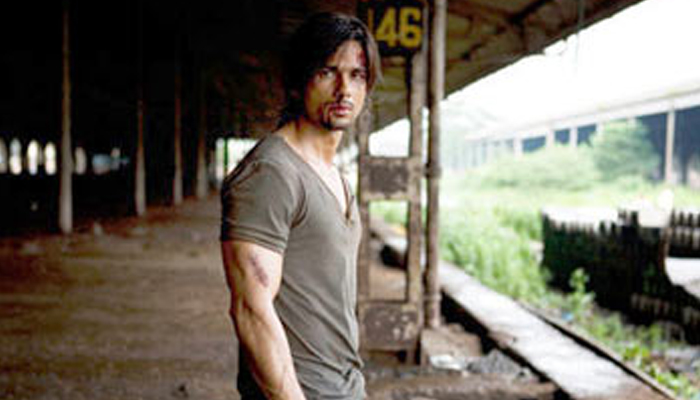 Bharadwaj's mastery over his craft and attention to detail is complimented by Shahid's brilliance. Bharadwaj gives the twins completely different identities -- and Shahid plays the two characters with an unapologetic panache, especially the detail of the speech defects both characters have.

The fabulous first half and the intermission lead to the sequence where Guddu has to find a guitar case full of drugs -- originally Charlie's -- and give it back to the police. From that moment, the search for the drugged guitar case makes Guddu and Charlie meet again, and eventually unite them to fight off their respective villains.

'Kaminey' unravels almost imperceptibly in the second half. Guddu, our decent homely lad, teaches safe sex to sex workers only to find out his girlfriend Sweety (Priyanka Chopra) is pregnant. They get married to have Sweety's gangster-turned- politician brother Bhau Bhope (Amol Gupte) and Charlie involved in their unlikely union.

Intense roles have always brought out the best in Shahid, and 'Kaminey' was no exception. Bharadwaj's executes this complicated script in an almost poetic manner. The writing is what makes this film outsmart every other crime caper.

The music, also given by Bharadwaj, is top notch. 'Dhan Te Nan' is still played at parties, concerts, TV shows and everywhere else.

Amol Gupte is fabulous and so is Priyanka Chopra.

Every brilliantly crafted film need not be a box-office success. This surely wasn't -- probably because of the year in which it was released. Chandan Roy Sanyal, who played Charlie's best friend in the movie, in a 2019 interview said the movie was way ahead of its time, and had it released in the post 2017-era, it could have raked in moolah.

Inconsistency marred Shahid's career early on, but sparks of brilliance in the form of movies like 'Kaminey' has brought him to a stage where one may not like him but won't be able to ignore him.

Still young at 39, Shahid has a long way to go. What he needs to do now -- especially in the post-'Kabir Singh' phase -- is sign more movies like 'Kaminey', wherein the raw talent the man has is brought out, put forth and served afresh to the viewers. The star that Shahid is and the actor that Shahid is, he needs to be seen in more movies like 'Kaminey'.

On Shahid Kapoor's 39th birthday, IndiaTV Recommends 'Kaminey' -- for the bundle of unbridled talent he is, for 'Dhan Te Nan', and for his mentor Vishal Bharadwaj's craft (IMDb rating: 7.4).