Ayushmann Khurrana is currently busy with the promotional duties of his upcoming film Bala and of the many ways by which the filmmakers are trying to get registered on the viewer's mind, one is the 'Don't Be Shy Again' challenge. 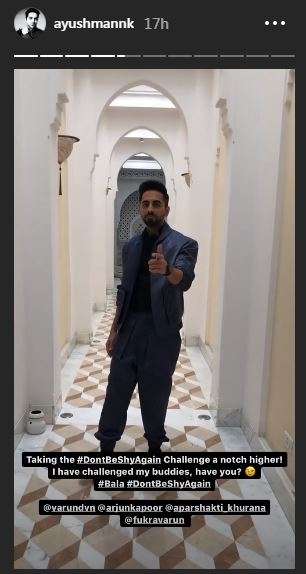 Aparshakti then took to his Instagram to share posts in which he was seen performing the hook steps of 'Don't Be Shy Again' with Varun Dhawan and Arjun Kapoor at their gym.

Sharing the video featuring Varun Dhawan, Aparshakti wrote, "Don’t Be Shy Ladies and Gentlemen. Take this challenge right away like @varundvn and I did. All the love to Bhratashree."

Arjun Kapoor also took up the challenge and grooved to 'Don't Be Shy Again' beat with Aparshakti.

"Trying very hard to not be shy but with @arjunkapoor just can’t help it #DontBeShy #TakeUpTheChallenge," he wrote.

The film has been in news for its similarities with another movie 'Ujda Chaman' which released on November 1, and received poor to average reviews.

Both films are based on a similar storyline and feature a man dealing with premature balding as their protagonist.