Varun Dhawan, who was last seen in Sui Dhaaga opposite Anushka Sharma, shared a video from the sets of Street Dancer thanking his fans for all the love and support.

Actor Varun Dhawan is all set to woo fans with his dancing skills once again in Remo D’Souza’s Street Dancer. The film, which is the third instalment of the ABCD series, has been making huge headlines ever since its inception. Reuniting with Shraddha Kapoor for the film, Varun Dhawan is currently busy shooting for the film in London.

Varun Dhawan, who was last seen in Sui Dhaaga opposite Anushka Sharma, shared a video from the sets of Street Dancer thanking his fans for all the love and support.

"What's up guys? As you know I am shooting in London right now for Street Dancer 3D. And this is just a video to say to thank all you guys. All you fans all over the world, specially in India who keep tweeting to me, keep messaging me, keep showering me with so much love. I am away from home but the love that I get from you guys and for my films. This is just to say that I am going to work my ass off and hopefully in 2019, you are going to love what's coming your way. There's Kalank and there's Street Dancer 3D. This is the set for Street Dancer 3D and right now this is where I am. Shraddha and I just shot a song right now”, Varun Dhawan says in the video.

As soon as the video hit the internet, there was much buzz everywhere. However, it was Arjun Kapoor’s comment that caught the attention at once. “London Ka Raja full of love for his fans”, said the Namaste England actor. 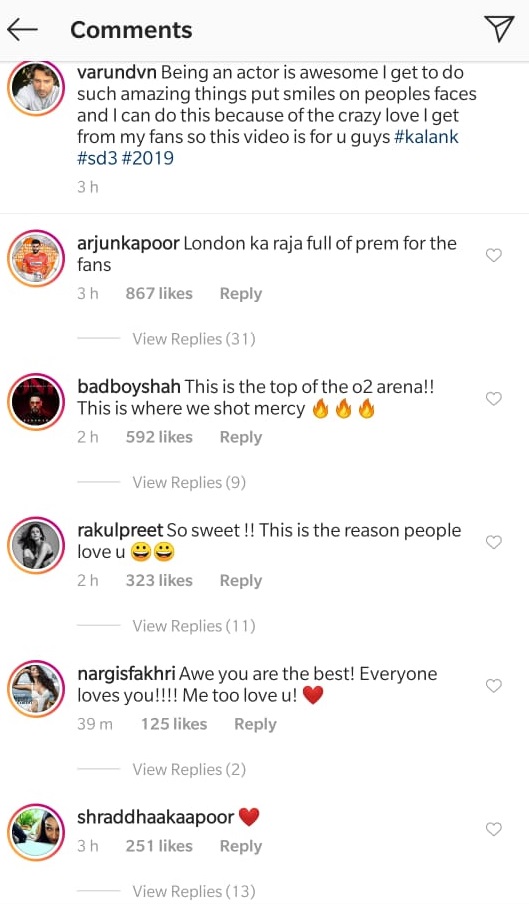 Street Dancer will also feature Nora Fatehi and Aparshakti Khurana in important roles. Varun and Shraddha were earlier seen in ABCD 2, in which they gave us a glimpse of their dancing skills.