Latest Bollywood News and Updates February 20: Actress who made her debut and won many hearts with film Citylights Patralekha celebrates her 29th birthday today.

Latest Bollywood News and Updates February 20: Actress who made her debut and won many hearts with film Citylights Patralekha celebrates her 29th birthday today. On the other hand, Katrina Kaif showered praises on Safeena aka Alia Bhatt through a post. The actress was all praise for the star cast of Gully Boy and Alia Bhatt also responded to her applaud in the most beautiful way. Also, Ananya Pandey’s debut appearance on Karan Johar’s Koffee With Karan 6 became the talk of the town and the actress herself shared her funny memes on social media. Did you hear about Ayushmann Khurrana’s character in his upcoming film Dream Girl? Check out all the latest Bollywood news and updates here-

Katrina Kaif is all praise for Ranveer Singh and Alia Bhatt’s Gully Boy, actress’ response will melt your heart

Katrina Kaif and Alia Bhatt have often revealed that the duo shares a very warm relationship with each other despite the fact that the latter is dating Katrina’s ex-boyfriend Ranbir Kapoor currently. While the rumours had it that the actresses’ relationship has gone sour, but their actions tell quite the opposite. Alia Bhatt recently featured in Zoya Akhtar directorial Gully Boy which is smashing the box office these days and the actress is gathering praises from all corners. After filmmaker Karan Johar, Bollywood beauty Katrina Kaif showered the cast and crew of the film with praises while she was busy shooting for her upcoming film Bharat.

Taking to her Instagram story, Katrina Kaif shared a poster of Gully Boy and wrote, “My dearest @zoieakhtar your time is here and how, you are such a leader and visionary, so fearless and always forging a new path @ranveersingh all heart and soul, what craft RESPECT @aliaabhatt you light up the screen words fall short to describe you @siddhantchaturvedi just phenomenal unforgettable performance, and the entire cast are just outstanding.” Katrina not just appreciated her close friend Zoya Akhtar’s directing skills but the entire starcast received her love. Check out the post here- 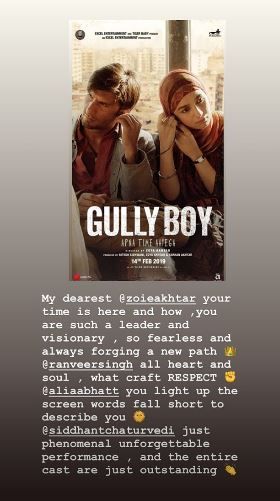 In no time, Alai Bhatt also took to her Instagram story to thank her friend Katrina Kaif for her golden words and claimed that she is the ‘Best Person’. Alia and Katrina are always seen praising each other at various platforms whenever asked about their equation. Recently, when Katrina Kaif appeared on Famously Filmfare, the actress revealed that her relationship with Alia is a very personal thing so why should it get affected with the fact that who are we dating. On the other hand, Alai Bhatt also in an interview praised Katrina and said that she likes her Instagram ethics as well as cations. 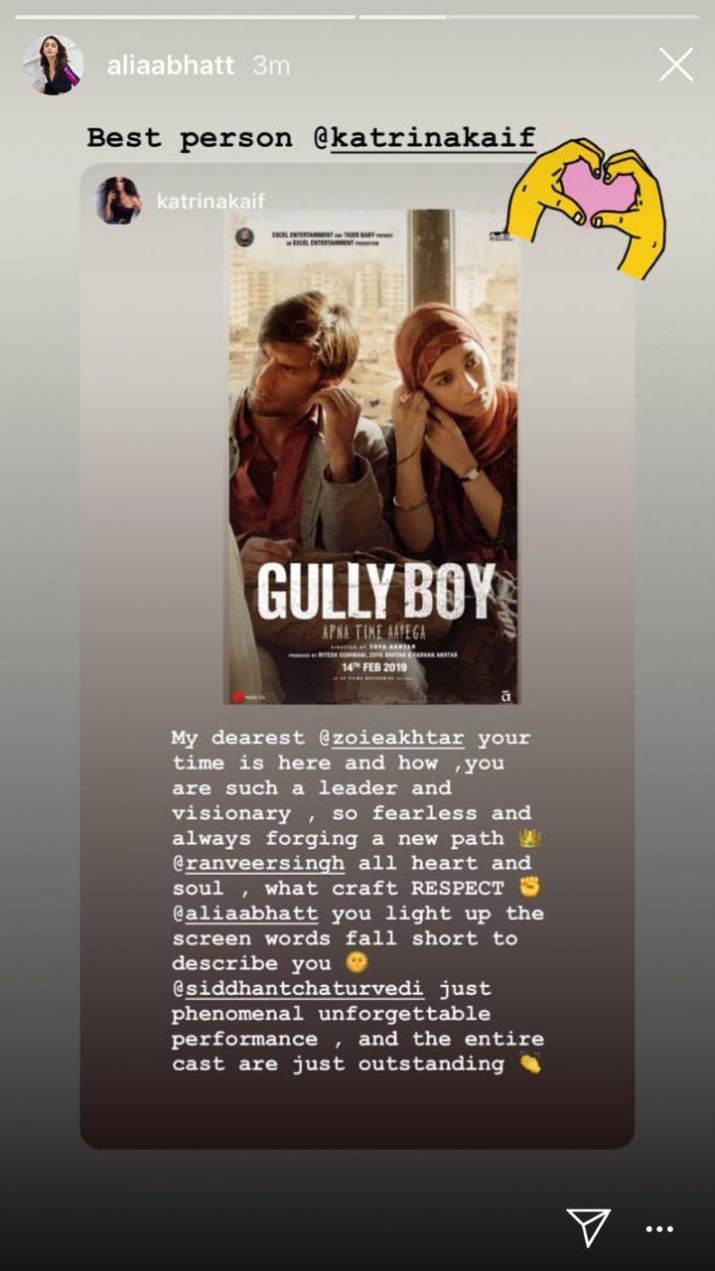 Ayushmann Khurrana, the actor who can bite into the skin of any character with ease, is gearing up for his next film called Dream Girl these days. There is no denying that fans are super excited about the film especially after watching the actor’s performances in his last film Badhaai Ho and Andhadhun and he keeps teasing his fans by lending out details about his upcoming films. While Ayushmann has already revealed that he will be stepping into the shoes of multiple character in his upcoming film Dream Girl, one of them will reportedly be of Sita from Ram Leela.

Ayushmann Khurrana’s avatar as a woman is already out through the posters of the film he shared on his social media and has even confirmed this in a recent interview. While Talking to Bollywood Hungama, Ayushmann revealed, “Dream Girl is really unique, really interesting because I get to wear a saree in the film. It’s about a guy who plays Sita in Ram Leela. Traditionally, in our country we have all seen guys playing Sita, so I’m one of those. He has the unique talent of taking out voices of both male and female. It’s like a full on commercial film.”

Known for her stellar performance in her debut film Citylights, Patralekha is much admired among the fans for her girl-next-door charisma and the innocence of her face. Celebrates her 29th birthday today, the actress won many hearts the moment she featured in her first Bollywood film Citylights and gathered praises for her acting skills and ability to captivate the audience whenever she in on the big screen. While Citylights was the turning point in her career, she also met the love of her life Rajkummar Rao during the same process. Later, the actress worked in films like Nanu Ki Jaanu and Love Games; and now, she is all set to make her Kannada debut with Where is My Kannadaka.

On her 29th birthday, let’s have a look at some of the unknown facts about the Citylights actress Patralekha.

Throwback video: When Parineeti Chopra wanted KRK and Bradley Cooper to contest in her Swayamvar

Parineeti Chopra is known for her charming personality and vibrant energy. The actress has accomplished herself as a good actor in Bollywood with a number of blockbusters to her credit and is always loaded with projects. While Parineeti claims that marriage is not on card for her, she earlier revealed that she would want Kamaal R Khan and superstar Bradley Cooper to contest in her Swayamvar. Parineeti appeared on Karan Johar’s most popular chat show Koffee With Karan season 4 when she made some interesting revelations about her choice of prospective grooms.

We have hot our hands on a video in which Karan Johar is seen firing rapid fire questions on Parineeti when she graced the couch in Season 4 with Alia Bhatt. Karan asked Parineeti to name two people she would like to have compete for her in her swayamvar, the actress replies, “Bradley cooper and Kamal R Khan”. She also adds, “Kamaal R Khan would win.” While her answer leaves KJo in splits, Alia Bhatt shockingly looks at Parineeti after her answer. Later Alia also reveals that Kamaal R Khan loves her so he will keep Parineeti very happy. Watch the video-

Ananya Pandey, daughter of popular Bollywood actor Chunky Pandey, is all set to make her mark in the industry with Dharma Productions’ Student Of The Year 2 which will hit the screens in May. Even before her debut, the actress has earned a huge fan base for herself and also appeared on Karan Johar’s entertaining chat show Koffee With Karan season 6 along with her co-stars Tara Sutaria and Tiger Shroff. The moment this new batch of Student graced the couch, KJo addressed the question of nepotism and Ananya maturely handled and accepted that she is a product of nepotism and hasn’t done anything to deserve the place she has got.

While many people on social media have been applauding her for having the courage to accept that, Ananya’s various moods and expressions, while she was interacting in the show, have turned into viral memes. The actress herself shared a couple of them on her Instagram and remarked, “I had no idea I was making all these expressions but loving the memes.” Ananya shared a picture in which she was deep in though and the meme says, “When there is many stylish new clothes in the wardrobe but still confused an don’t know what to wear.” Check out the post here-

Here are some more memes on Ananya Pandey.