Deepika Padukone on Padmavati row: 'We have regressed as a nation'

Sanjay Leela Bhansali’s Padmavati is once again caught in controversies ahead of its release. And Deepika Padukone is sure that the film will be released.

A decade ago when she forayed into Bollywood, Deepika Padukone never imagined she would be a Sanjay Leela Bhansali heroine one day. Now, as she prepares for the release of epic drama 'Padmavati', which clocks her trilogy with the filmmaker, the actress is confident the movie will tide over the controversy, hit the screens and win a "bigger battle" for the industry.

"As a woman, I feel proud to be a part of this film, and to tell this story, which needs to be told. And it needs to be told now," Deepika, who plays the title role in "Padmavati" -- Bhansali's professed tribute to the sacrifice, valour and honour of Rajput queen Rani Padmavati told IANS over phone from Mumbai.

Deepika Padukone’s romantic comment on Ranveer Singh’s photo is suggesting anything but ‘breakup’!

Pics: Deepika Padukone stuns in black sari at GQ night but all haters see is 'vulgarity'

Doubts on the extent to which the National Award winning filmmaker has fictionalised the story, has led to a spiralling controversy with politicians, organisations and individuals raising a finger at Bhansali for "distorting history" and demanding that the release of "Padmavati" be stalled. Deepika is convinced the movie will release, as scheduled, on December 1.

"It's appalling, it's absolutely appalling. What have we gotten ourselves into? And where have we reached as a nation? We have regressed," she said, commenting on the hullabaloo the movie is causing pre-release.

"The only people we are answerable to is the censor board, and I know and I believe that nothing can stop the release of this film," said Deepika, adding that the film industry's support symbolises how "this is not about 'Padmavati'... We're fighting a much bigger battle".

"Padmavati" marks the third film that Deepika has worked in under Bhansali's direction after romantic crime drama "Goliyon Ki Raasleela Ram-Leela" and historical drama "Bajirao Mastani" -- all of which, she says, gave her roles "so similar, yet so different".

"They are very independent individuals and very strong characters," Deepika said, her voice exuding pride that in "Padmavati", while there are two men -- Shahid Kapoor and Ranveer Singh -- she essays the title role, which "does not happen often in a woman's career".

"I celebrate that," she said.

Interestingly, November has marked not just Deepika's 10 years in the film industry -- her debut film "Om Shanti Om" was released on November 9 -- but also November 15 is when "... Ram-Leela" hit the screens four years ago.

"When I debuted, 'Saawariya' (directed by Bhansali) and 'Om Shanti Om' had released on the same day. I remember back then, there was this whole thing about the films clashing, this debut versus that debut. But I was so naive and so new that none of that made any sense to me at that point. The only thought I remember thinking to myself then was, 'Oh! How come he didn't cast me in his movie?'

"I didn't ever think that I could be a Bhansali heroine," said the daughter of badminton icon Prakash Padukone.

She describes the "evolution" as "phenomenal".

"From never having been to a film set before and to not knowing how to deliver dialogues to today enjoying the craft so much where I am the most peaceful and happiest when I am in front of the camera... I think that's the evolution. And then along the way you meet a Sanjay Leela Bhansali, who adds so much meaning to me not just as an actor and performer, but also as a human being," the actor said.

"Ten years ago, thinking that I don't fit the mould of being a Bhansali heroine, and today working in three films with him back-to-back... It's been a pretty incredible journey," said Deepika, who says she senses a soul, heart and mind connect with the director.

"We just understand each other by just looking at each other... I think you can only get to that stage when you reach a different sort of, almost a spiritual level of creativity, where you're not afraid to take risks or failure. Everything you want to do is coming with a pure heart and a pure intention."

So, can one expect them to collaborate yet again? 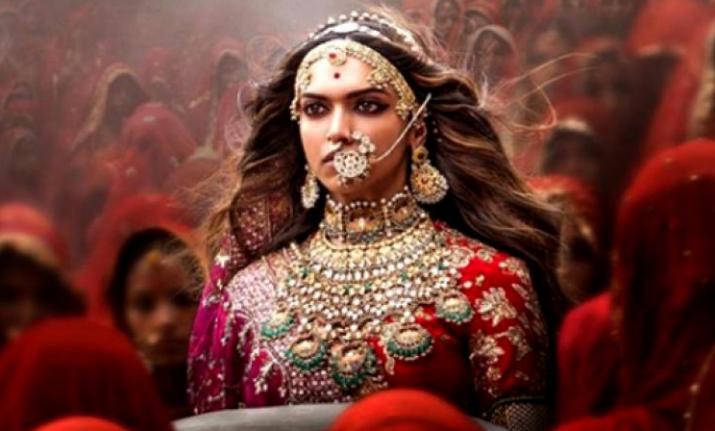 ​Featuring leading lady Deepika Padukone, the new poster looks amazing all the way. The Ram Leela actress expresses honour and dignity through her eyes in her royal avatar. The much-talked about film also stars Ranveer Singh and Shahid Kapoor in lead roles. Various Rajput groups, including the Karni Sena, have threatened to disrupt the screening of the movie, accusing Bhansali of "distorting" historical facts.