Voting for 44 constituencies in West Bengal's fourth phase Assembly elections concluded on Saturday amid tight security. It was one of the most intense phases of the Bengal polls which witnessed violence at one of the polling stations in Cooch Behar, leaving 5 people dead.

Voting for 44 constituencies in West Bengal's fourth phase Assembly elections concluded on Saturday amid tight security. It was one of the most intense phases of the Bengal polls which witnessed violence at one of the polling stations in Cooch Behar, leaving 5 people dead. A total of 373 candidates across five districts - Cooch Behar, Alipurduar, South 24 Parganas, Howrah and Hooghly, were in the fray. Among the 44 constituencies, nine are in Howrah, 10 in Hooghly, 11 in South 24 Parganas, five in Alipurduar and nine in Cooch Behar. A total of 1,15,81,022 voters were eligible to participate in this phase, out of which 2,63,016 were first-time voters.

06:17 pm: One daughter of Bengal is attacking the other. If I broke the glass of my car myself then who broke the other two press vehicles? You all (media) were present there. Did press themselves break their own vehicles, asks BJP candidate from Chunchura, Locket Chatterjee.

05:40 pm: 75.93 per cent voter turnout has been recorded till 5:24 pm. Voting for the fourth phase of the State's Assembly elections is underway. 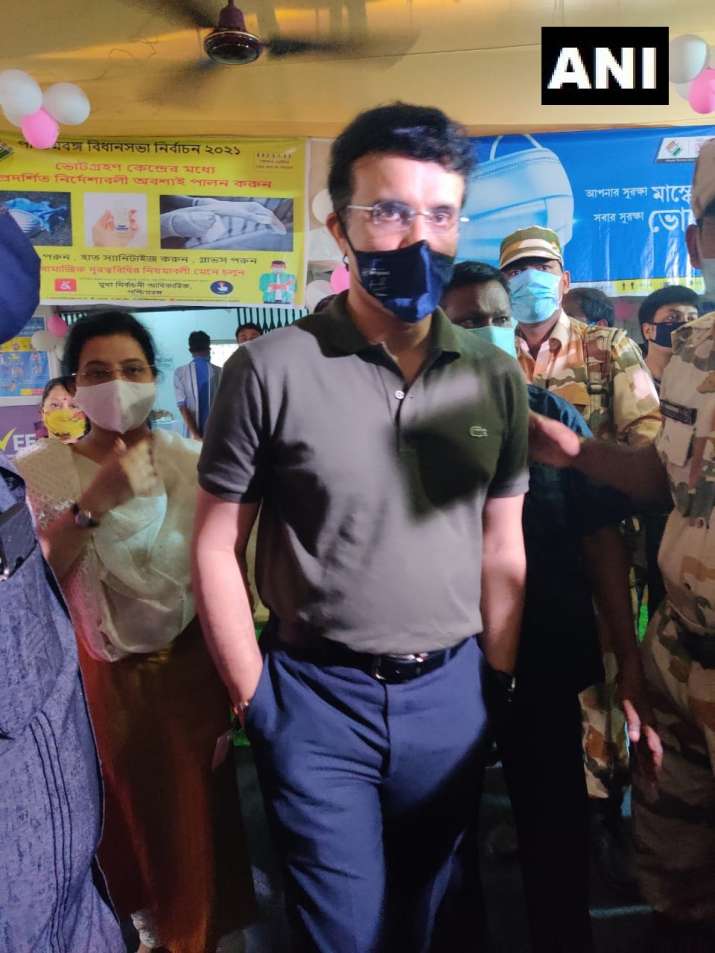 02:05 pm: A total of three people, including the main accused, arrested in connection with the incident where a Bihar Police official was beaten to death in Uttar Dinajpur of West Bengal

01:49 pm: TMC to protest firing by CRPF at Sitalkuchi by wearing black badges on Sunday, says Mamata Banerjee at Baduria

01:23 pm: The Election Commission has ordered the adjournment of polls at polling station number 126 in the Sitalkuchi Assembly constituency of West Bengal amid reports of violence. A spokesperson of the poll panel said the decision was based on an interim report filed by special observers. Detailed reports have been sought from them and the state Chief Electoral Officer by 5 pm

12:54 pm: West Bengal: A five-member delegation of the All India Trinamool Congress will meet the Election Commission in Kolkata, today

12:38 pm: West Bengal CM Mamata Banerjee replies to Election Commission notice to her on her remarks on CAPFs. She states, "There has been no effort to incite/influence the electorate against CAPFs. It is clear I haven't violated Model Code of Conduct." 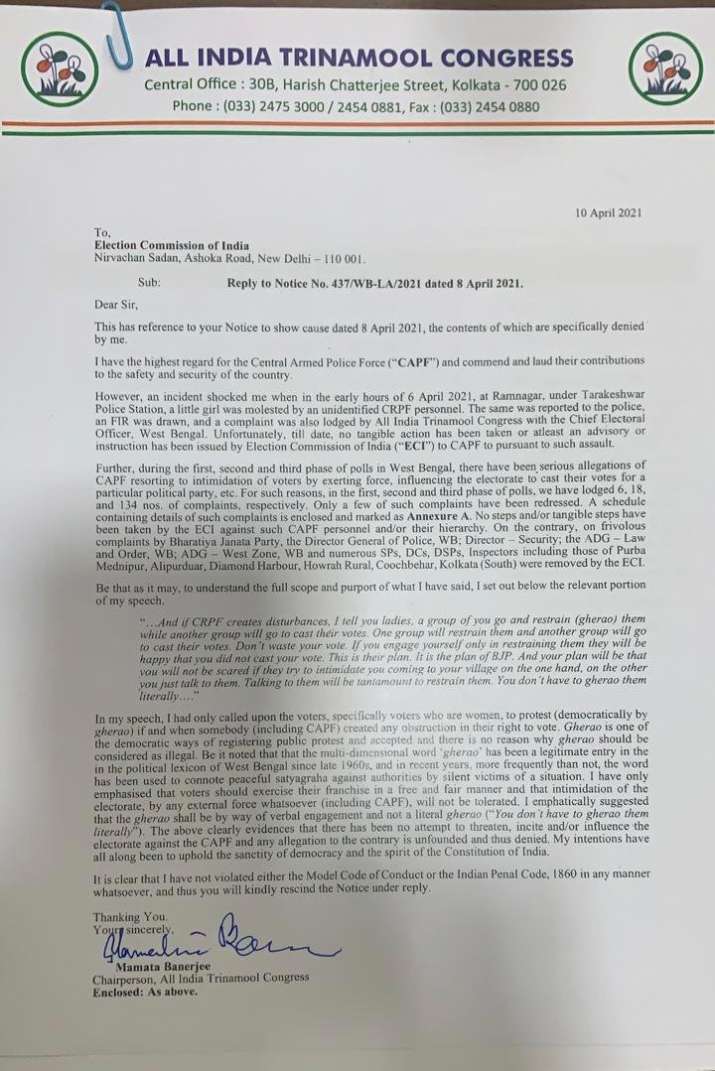 12:25 pm: 33.98 per cent voter turnout recorded till 11 am in 44 seats where polling is underway for fourth phase of West Bengal elections

12:01 pm: Four persons have been killed as CISF personnel allegedly opened fire after coming under attack from locals, who attempted to snatch their rifles, in West Bengal's Cooch Behar district. The incident took place in Sitalkuchi area when voting was underway, a senior police officer said.

11:56 am: Indian Secular Front chairman and candidate from Bhangar in South 24 Parganas district, Naushad Siddiqui and BJP candidate from the constituency, Soumi Hati greet each other

11:09 am: ITBP personnel, deployed on election duty, at polling booths in Rishra of Hooghly district help an elderly woman as she arrives to cast her vote for the fourth phase of West Bengal polls 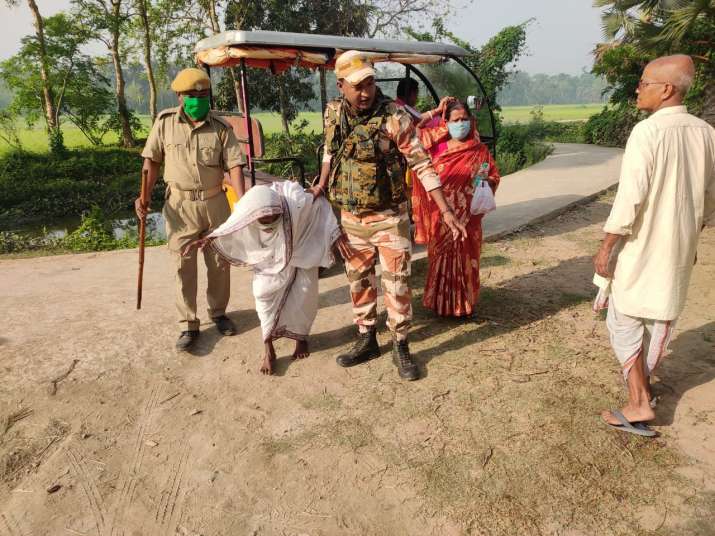 10:57 am: BJP leader Locket Chatterjee speaks to an Election Commission official over phone

10:39 am: First-time voter shot dead by unidentified persons outside a polling booth in West Bengal's Cooch Behar district. The Trinamool Congress alleged that the BJP was behind the killing, while the saffron party claimed that the deceased was its polling agent at the booth and pointed the accusing finger at the ruling party in the state. The youth, identified as Anand Burman, was dragged outside polling booth number 85 in the Pathantuli area of Sitalkuchi while voting was underway and shot dead

10:21 am: WB: SHO of Kishanganj Police Station in Bihar, Ashwini Kumar beaten to death by a crowd in a village in Goalpokhar police station area of Uttar Dinajpur

10:04 am: Narendra Modi Ji is famous throughout the world. Prashant Kishor has done the work of putting the last nail in the coffin, finishing TMC: Coochbehar MP, Nisith Pramanik, West Bengal

09:52 am: West Bengal elections: 15.85 per cent voter turnout recorded till 9 am in 44 seats where polling is underway for fourth phase

09:31 am: Prashant Kishor also knows that Modi Ji is the best and a 'sonar Bangla' will be made under his leadership. But to fool the people he got associated with TMC: BJP leader Locket Chatterjee, in Hoogly

09:22 am: Glad BJP's taking my clubhouse chat more seriously than the words of its leaders. On selective use of part of conversation, urge them to release full conversation: Prashant Kishor to ANI on leaked audio where he's saying "Modi, Mamata equally popular" among Bengal poll-related things

09:01 am: Clashes erupt between TMC and BJP workers in Cooch Behar

08:32 am: Security personnel helps woman voters get to the polling station in Alipurduar.

08:29 am: TMC candidate from Natabari constituency in Cooch Behar seen wearing a helmet.

08:04 am: People stand in a queue outside Hatgacha Haridas Vidyapith (H.S), designated as a polling booth, in Bhangar of South 24 Parganas district

08:01 am: TMC writes to Election Commission alleging that "across several booths in Sitalkuchi, Natalbari, Tufanganj and Dinhata, BJP goons are creating a ruckus outside the booth and preventing TMC agents from entering the booth." TMC demands necessary actions from EC 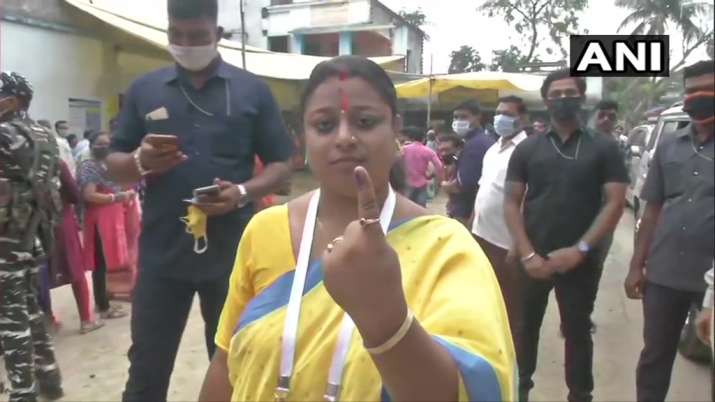 07:17 am: People queue up to cast their votes for the fourth phase of West Bengal elections 2021

7:00 am: Voting for the fourth phase begins on 44 seats across 5 districts

06:45 am: "I appeal to people to come to polling stations, cast votes," says  Payel Sarkar, BJP candidate from Behala East

06:35 am: Voters queue up at polling station to cast their votes in Bhangar  constituency of South 24 Parganas