Pushpam Priya Choudhary also shared a master plan for the development of. The Plurals Party chief has promised 80 lakh jobs in Bihar if her party forms the next government after Bihar Assembly election 2020.

Plurals Party chief Pushpam Priya Choudhary has promised 80 lakh jobs to the people of Bihar if her party, Plurals, forms the next government in the state. She said that her government will establish the practices of 'rajdharma' where everybody will be treated equally and with dignity.

Pushpam Priya Choudhary also shared a master plan for the development of the state in the next 10 years. According to the election document, the state will be divided into 8 development zones - Patliputra, Ang, Magadh, Champaran, Mithila, Kaushiki, Kaimur, and Vaishali.

All the 38 districts will be connected with an eight-land expressway and also an eight-lane goods transport corridor. In each zone, Pushpam Priya's government will develop eight global tourism hub to promote tourism.

She said that agriculture will be given the status of an industry and promised a guaranteed loan to farmers. She also promised to bring a new mechanism of "Minimum Sale Price". This will replace the existing Minimum Support Price system by promising a  handsome profit to the farmers for their produces.

In each development zone, Pushpam Priya promised to set up an industrial zone and a special economic zone. Each zone will get a flood and irrigation system. Rivers like Ganga, Sone, Kosi, Mahananda, Bagmati, Falgu will be interlinked.

In the education sector, Pushpam Priya Choudhary said that her government will open the 'State of the Art Education" centres in each zone. Every ward and panchayat will be provided with basic infrastructure. Model schools, model hospitals, model libraries, model sports complex, model park or community centres, model bus shade, model market, stadium, and yoga will be set up.

Pushpam Priya also called for empowering women as she promised job to one woman in each BPL family. Besides, the government will construct a three-room pucca house for every BPL family. They will also be given free ration for the five years, free medical treatment, and education. 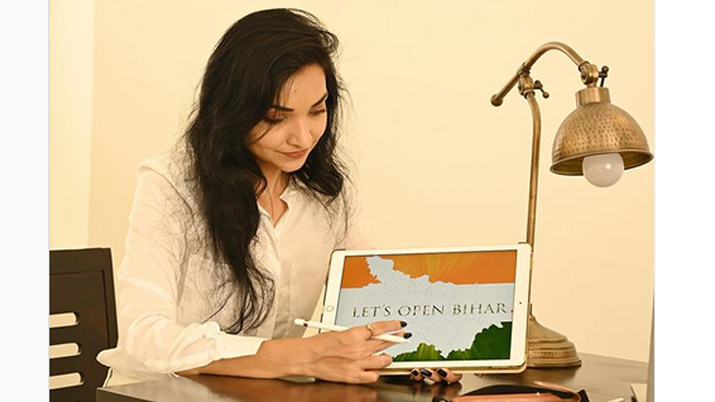 The Plurals party chief has also promised to do away with the prohibition law. She said that alcohol would be made available to adult immediately. But promised to deal with incidents of domestic violence with a firm hand.

To check crime against women, Pushpam Priya has promised to install CCTV at every nook and corner.

Pushpam Priya Choudhary is the daughter of Janata Dal-United leader Vinod Choudhary. She launched her own political party -- Plurals party on the occasion of International Women's Day in March.

The 33-year-old has declared herself the chief ministerial candidate of the Plurals Party and announced that her party will contest on all 243 seats of which 50% will be women. The young leader has promised to turn Bihar into Europe by 2030.

Pushpam Priya Choudhary herself is contesting from Bankipore Assembly seat in Patna district.

ALSO READ: Who is Pushpam Priya Choudhary: Meet the 33-yr-old who wants to turn Bihar into Europe