UP Lok Sabha bypoll results: As it happened

The setback comes as a huge shocker to the year-old BJP government in Uttar Pradesh, where Adityanath, who has represented Gorakhpur in the Lok Sabha seat for five consecutive times, vacated it after becoming the Chief Minister.

Gorakhpur and Phulpur, the two constituencies that went to polls on March 11, saw a voter turnout of 47.45 per cent and 37.39 per, respectively.

# This is a mandate against both the Centre and state governments, people have come together to bring "bad days" for BJP, claims Akhilesh

# Governments which trouble people are brought down; this government brought problems and led to fear among people: Akhilesh Yadav

# Akhilesh attributes SP wins to the support from Dalits, farmers, labourers, women and unemployed; says it is victory of social justice.

# If this is the anger of people in areas of Chief Minister & Deputy CM, you can imagine the anger of the people in rest of the country: Akhilesh Yadav

​​6:15 pm: I than people of Gorakhpur and Phulpur for showing faith in us. I also want to thank BSP leader Mayawati for her support on both Lok Sabha seats : Akhilesh Yadav

5:38 pm: Yogi Adityanath concedes defeat, says results are unexpected. We worked very hard… we accept the people’s verdict, overconfidence led BJP to defeat in by polls. It is a political bargaining between BSP-SP. Will chalk out strategy and assess the shortcomings. I congratulate the winning candidates.

Polling percentage has gone down which affected the result of the two seats. We will analyse and work on the places where we lacked and will work harder & perform better in the 2019 elections: Mahendra Nath Pandey, UP BJP Chief on UP bypoll results pic.twitter.com/fgCRcPXG6M

5:07 pm: We had not seen the Samajwadi Party and BSP coming together but since we have come to know of this now...and though there is still a long time (ahead of the polls)...we will redraw our strategy keeping this factor in mind: Sidharth Nath Singh 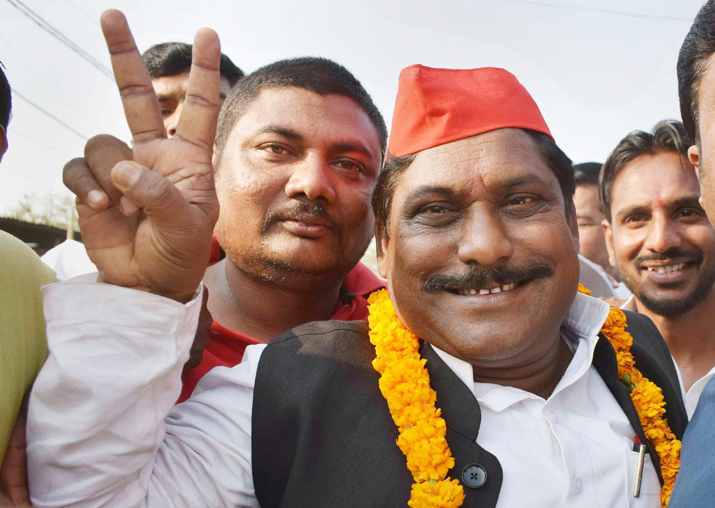 Samajwadi Party's Nagendra Pratap Singh Patel leading by 47,351 with 3,05,172 votes in #Phulpur ByPoll after 28th round of counting. pic.twitter.com/YYMec4kubU

3:15 pm: We didn't expect that BSP's vote will be transferred to SP in such a manner. We will analyze after seeing the final results & prepare for a situation in future when BSP, SP & Congress can come together & also make our strategy for winning 2019 elections: Keshav Prasad Maurya, Deputy CM

02:44 pm: Great victory. Congratulations to Mayawati Ji and Akhilesh Yadav Ji for UP bypolls The beginning of the end has started, tweets Mamata Banerjee.

We didn't expect that BSP's vote will be transferred to SP in such a manner. We will analyze after seeing the final results & prepare for a situation in future when BSP, SP & Congress can come together & also make our strategy for winning 2019 elections: KP Maurya, Deputy CM pic.twitter.com/XOLQrg7cG4

01:15 pm: Gorakhpur bypoll results: Samajwadi Party ahead of BJP by 13,000 votes in eleventh round of counting.

11:35 am:  Samajwadi Party leading in both Phulpur, Gorakhpur.

09:07 am: I'm confident of my victory and that is what people are saying that Samajwadi Party's grand alliance will win this seat but there is a doubt in everyone's mind regarding EVM machines. Government can do anything using state administration, says Samajwadi Party Gorakhpur candidate Praveen Kumar Nishad

08:42 am: Phulpur bypolls early trends | Bharatiya Janata Party is ahead by 712 votes

08:41 am: Gorakhpur is significant for the Bharatiya Janata Party (BJP) as it is the bastion of Uttar Pradesh Chief Minister Yogi Adityanath, who represented the seat in the Lok Sabha five times. While, Phulpur, once represented by the country's first prime minister Jawaharlal Nehru, witnessed a saffron surge in the 2014 Lok Sabha election when Maurya won the seat.

08:40 am: Samajwadi Party's Pravin Nishad is on second spot.

08:35 am: While in the Gorakhpur bypoll, Bharatiya Janata Party's (BJP) Upendra Dutt Shukla is leading; in Phulpur, Allahabad, Kaushlendra Singh Patel also of BJP is leading with a slender margin, an official said.

08:30 am: Bharatiya Janata Party is ahead in both Gorakhpur and Phulpur.

08:00 am: Counting of votes begins in Gorakhpur, Phulpur constituencies begins.

07:50 am: As per Election Commission, there are 19.61 lakh voters in the Phulpur Parliamentary constituency, while the Gorakhpur Lok Sabha seat has 19.49 lakh voters.

07:30 am: On the polling day, Uttar Pradesh CM Yogi Adityanath had claimed that the BJP was getting a widespread support from the people.

07:20 am: Deputy Chief Minister Keshav Prasad Maurya had said his party would win both the seats.

07:00 am: Earlier, Uttar Pradesh Chief Minister Yogi Adityanath had said that the 'electoral understanding' struck by arch rivals Bahujan Samaj Party and Samajwadi Party was of no consequence in the parliamentary bypolls of Gorakhpur and Phulpur.

06:40 am: Samajwadi Party (SP) chief Akhilesh Yadav had said it (polling day) was a day to "change and re-write history".