The polling for the fifth phase of West Bengal assembly elections across 45 assembly segments concluded on Saturday amid tight security.

The polling for the fifth phase of West Bengal assembly elections across 45 assembly segments concluded on Saturday amid tight security. Long queues were seen outside polling booths where voting is underway adhering to COVID-19 protocols, official sources said. Over one crore voters were eligible to exercise their franchise to decide the political fate of 342 candidates. Security measures were heightened for the fifth phase in view of the violence in the previous phase, which witnessed the death of five people in Cooch Behar district, including four in CISF firing.

The Election Commission decided to deploy at least 853 companies of central forces to ensure free and fair voting, an official said.

01:56 pm:  A booth agent of the BJP died after falling sick at a polling station in West Bengal's North 24 Parganas district on Saturday morning, prompting the Election Commission to seek a report. Abhijit Samanta, the BJP agent of booth number 107 in the Kamarhati assembly constituency, fell sick within an hour of the beginning of the polling. Samanta was declared brought dead when taken to a hospital

10:18 am: I supported BJP for 15 years but what did it do for my community? Modi had assured us and made a commitment, it has been 6.5-7 years now but it is yet to be completed: GJM (Gorkhaland Janmukti Morcha) leaders Bimal Gurung

10:12 am: They (BJP) don't have people's support in Bengal. They don't have much influence on ground zero. How can they form the government? Politics is not possible through violence, vandalism, shooting. Politics should be simple: GJM (Gorkhaland Janmukti Morcha) leaders Bimal Gurung

10:03 am: Election Commission has sought a report over the sudden death of a BJP polling agent at booth number 107 in Kamarhati today "His name is Abhijeet Samant. Nobody helped him, there is no facility for treatment here," says brother of the deceased BJP polling agent

09:46 am: Bengal records 16.15 per cent voter turnout till 9 am in 45 seats where polling is underway for fifth phase

09:28 am: I've full authority to enter a polling booth. They (Central forces) even searched my pocket in which I was carrying pictures of my goddess.This is a democratic country. I'm going to meet Chief Election Commissioner: TMC leader and candidate Madan Mitra, at booth no. 165/166 Kamarhati

08:11 am: Voters queue up outside Hiralal Mazumder Memorial College for Women - designated as a polling booth - in Dakshineswar, Kolkata 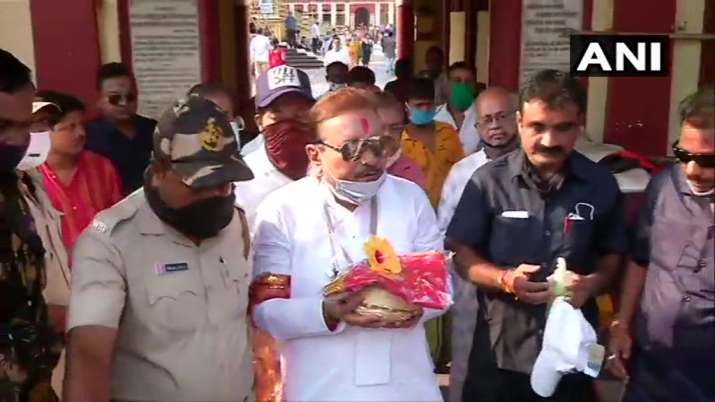 07:53 am: It looks like 'khela shesh' so far. We're keeping a watch. As far as the Hills & our problems are concerned, we want that this government be changed; we want BJP govt, we want justice: Gorkha National Liberation Front (GNLF) president Mann Ghising, in Darjeeling

07:47 am: Voters queue outside polling booth 263 in Bardhaman South

07:30 am: Polling underway at Booth number 263 in Darjeeling

07:08 am: Voters queue up to cast their votes as 5th phase of polling begins; visuals from Kamarhati

06:46 am: Visuals from a polling booth in West Bengal's Siliguri, ahead of fifth phase polling in the state

06:39 am: Ahead of phase 5 polling, voters queue up outside a polling booth in Kamarhati, West Bengal

06:34 am: Ahead of the fifth phase of polling, visuals from a polling booth in Bidhannagar, West Bengal

In the Siliguri constituency, CPI(M)'s Ashok Bhattacharya is the key contestant against BJP candidate Shankar Ghosh and TMC's Omprakash Mishra. Bhattacharya, the former Mayor of Siliguri is a prominent communist leader in North Bengal.

Senior TMC leader and minister in the state government Bratya Basu is contesting from Dum Dum. CPI(M) has fielded Palash Das and BJP has fielded Bimal Shankar Nanda from the constituency.

Actor Chiranjeet Chakraborty will contest from Barasat on the behalf of TMC against BJP candidate Shankar Chatterjee and Forward Bloc candidate Sanjib Chattopadhyay. Meanwhile, there is a contest between TMC's Sujit Bose and BJP's Sabyasachi Dutta for the Bidhannagar constituency.

Naxalbari, which is known for an over 50-year-old Maoist movement, has been witnessing a transition from a Red belt into a saffron fabric. While BJP has fielded Anandamoy Barman from the Matigara-Naxalbari constituency, Congress has fielded sitting MLA Sankar Malakar and TMC will rely on Captain Nalini Ranjan Ray. Malakar has been representing the Matigara-Naxalbari Assembly constituency since 2011.

In the Memari constituency in Purba Bardhaman district, TMC's Madhusudan Bhattacharya is the strong contender against BJP's Bhismadeb Bhattacharya and CPI(M)'s Sanat Banerjee.

On the other hand, in Jamalpur constituency, sitting Marxist Forward Bloc MLA Samar Hazra has an edge over TMC's Alok Kumar Majhi and BJP's Balaram Bapari.

In the Dabgram-Phulbari constituency there is a contest between TMC candidate Goutam Deb, BJP's Sikha Chatterjee and CPI(M)'s Dilip Singh. Deb is currently serving as the state tourism minister.

In Darjeeling, Kurseong and Kalimpong constituencies, TMC has not fielded its candidate as GJM is backing the TMC. The GJM had won these seats in the last two Assembly elections.

Pemba Tshering is the candidate for GJM (Gurung) for Darjeeling and Keshav Raj Sharma for GJM (Tamang). BJP has fielded Neeraj Zimba Tamang from the seat, while Gautam Raj Rai will contest for CPI(M) there.

The first four phases were held on March 27, April 1, April 6 and April 10 respectively. The sixth phase of the state assembly polls is scheduled for April 22. The counting of votes will take place on May 2.