Delhi Chief Minister Arvind Kejriwal holds a special tryst with February 14 - Valentine's Day. The AAP chief's capital sweep has created a history as the Aam Aadmi Party has gained more than 62 seats in Delhi Election Results 2020 and this was officially declared by the Election Commission. The BJP, meanwhile, was reduced to single-digit this year.

Arvind Kejriwal-led Aam Aadmi Party pulled into a commanding lead in Delhi Election Results 2020, as the party managed to gain more than 60 seats as against the Bharatiya Janata Party, which struggled at 12 seats. According to the Election Commission, several Aam Aadmi Party candidates have won from different constituencies, which takes the party ahead to a landslide victory. With this win, Kejriwal is set to take oath as the Chief Minister of Delhi for a third consecutive term, very likely on Valentine's Day - February 14.

The results are no different than what the exit polls had suggested. Kejriwal-led Aam Aadmi Party will retain its hold in Delhi, the exit polls had said. Meanwhile, Congress, which has earlier been in power in Delhi, seems to be fighting just to be relevant in the politics of the national capital. Back in 2015, Congress had drawn a blank.

Not many are aware, but Arvind Kejriwal has an association with the special date, and this has been in notice since the 2013 Delhi assembly elections. The Aam Aadmi Party was founded in November 2012 and it contested elections for the first time in 2013. The election threw a hung assembly with BJP winning 31 of the 70 seats, while AAP struggled on 28 and Congress on 8. It was then when AAP joined hands with Congress to come to power after which Kejriwal took oath in December.

However, soon after, AAP and Congress turned sour towards each other and Kejriwal resigned from CM post on February 14, 2014. Delhi saw President's rule after AAP's 49-day government came to an end.

Nearly after a year, the Election Commission announced polling in the national capital, which led to Kejriwal's government formation for a second time. While voting took place on February 7, counting of votes was undertaken on February 10. The Aam Aadmi Party proved all pollsters wrong and Kejriwal's party created a record of sorts. It won 67 seats while BJP limited itself to just 3.

In 2015, the historic Ramlila Maidan witnessed Kejriwal's oath as the chief minister of Delhi on February 14. A year later, Kejriwal took to Twitter and poured his heart out over the significance of the day.

As the Aam Aadmi Party completed its 3 years in power on February 14, 2018, a Delhi University student asked Kejriwal for a message to the country in the name of love.

"The reply of hatred is not hatred. Hatred can be countered only by love. Divisive politics is being played throughout the country. It is a matter of great concern for all citizens of this country. No one can remain silent in such a situation. Everyone will have to raise her or his voice against it," the Delhi Chief Minister had responded. 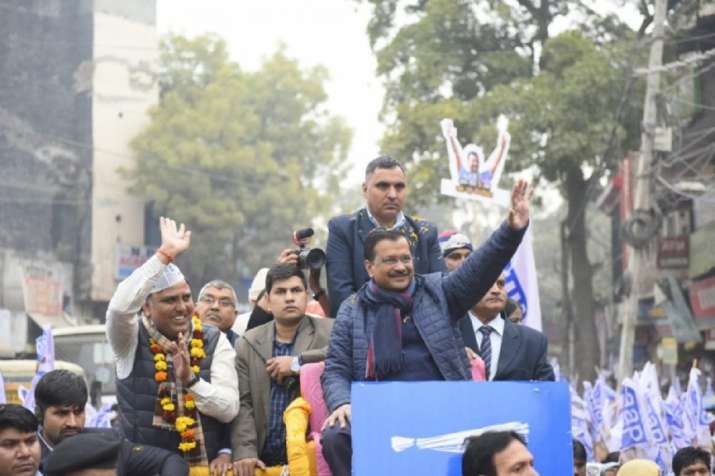 As the Election Commission stamped AAP's massive win, Kejriwal is very likely to choose February 14 as his oath-taking day this year too.

Kejriwal had touted himself as a good governance man, he had promised doorstep delivery of rations and offered spoken English classes and a patriotism curriculum to school students. His campaign slogan told voters, "Acche beete paanch saal", which means 5 years have passed well when translated to English.

We congratulate Chief Minister Arvind Kejriwal for his massive win in Delhi Elections 2020.