The exit poll shows the Congress lagging behind the BJP with the grand old party getting between 32 to 38 seats.

Chhattisgarh CM Dr Raman Singh is likely to form government in the maoist-affected state for the fourth time with the Bharatiya Janata Party(BJP) winning 42 to 50 seats, according to India TV-CNX exit poll.

The exit poll shows the Congress lagging behind the BJP with the grand old party getting between 32 to 38 seats.

After parting ways with the Congress, Ajit Jogi's Janata Congress Chhattisgarh(J) joined hands with the Bahujan Samaj Party in the hope of winning substantial number of seats but the exit poll predicts otherwise. According to the exit poll, the JCC(J) and the BSP combine may win only six to eight seats.

Whereas, the others may win one to three seats. 'Others' include independents and small regional parties.

In Durg region, having 20 seats, BJP and Congress may share ten seats each, while in Bilaspur, having 24 seats, BJP may get 10 seats, Congress eight, and BSP-JCCJ may win six seats.

In tribal-dominated Bastar region, having 12 seats, BJP may win nine and the Congress may win the remaining three seats.
In Sarguja, having 14 seats, BJP and Congress may share six seats each, while BSP-JCCJ combine and Others may share one seat each.

The exit poll was conducted on polling days at 300 polling stations covering 30 assembly seats, and a questionnaire was given to 3600 men and women voters in the age group 18--60 years, CNX said. 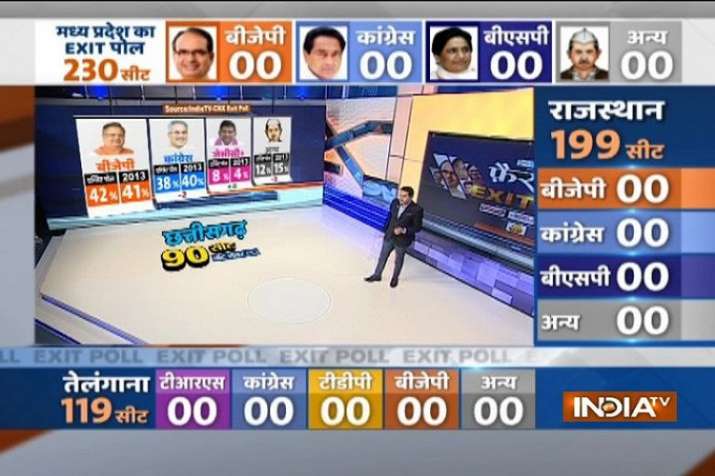