A total of 374 districts in India have been identified as “educationally backward", with Uttar Pradesh having the highest number of 41 districts, the Union Education Ministry said in the Lok Sabha. Uttar Pradesh is followed by Madhya Pradesh with 39 districts, Rajasthan- 30, Tamil Nadu- 27, Bihar- 25. 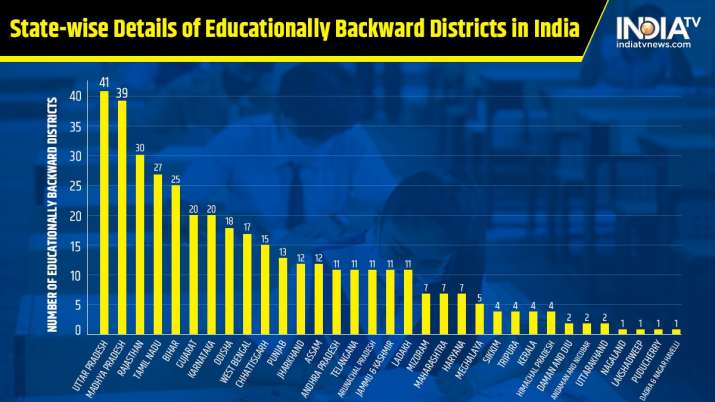 Sikkim, Tripura, Kerala, and Himachal Pradesh have four educationally backward districts each, Daman and Diu, Andaman and Nicobar, and Uttarakhand have two, while Nagaland, Lakshadweep, Puducherry and Dadar, and Nagar Havelli have one each.

As per the ministry data, there is a marginal increase in Gross Enrolment Ratio (GER) in upper primary and secondary between 2015 and 2020, while it was dropped for primary education. The GER in higher education has increased to 27.1 in 2019-20, while to 51.4 in higher secondary.

The government has also taken measures to improve the educational standards and to reduce gender gaps in education institutions. "To reduce gender gaps at all levels of schooling, 5,726 KGBVs (Kasturba Gandhi Balika Vidyalaya) have been sanctioned in the country. Model Degree Colleges have been sanctioned in 194 districts of which UGC had sanctioned 64 and 130 MDCs were sanctioned under the Centrally Sponsored Scheme of Rashtriya Uchchatar Shiksha Abhiyan (RUSA)," the education ministry stated.