Akash Ambani is down-to-earth and this video is the proof.

Held at the Jio World Centre, the evening also had one-of-a-kind musical fountain-cum-dance show, set on the theme of Raas Lila of Lord Krishna, Radha and the Gopikas of Vrindavan. Above all, there was a live show by American pop rock band Maroon 5. Video of the newlywed couple doing a romantic dance also went viral on the internet. Interestingly, we stumbled upon a cute video of the duo in which Akash is introducing Shloka to the paparazzi. As the couple arrives for photo-op, shutterbugs congratulate them for their new journey to which Akash replies, ''Meri Biwi Se Milo''. Isn't that cute?

Earlier, during their engagement bash, Akash Ambani told media to publish their best photo. ''Achcha Photo Chhaapna,'' he was heard saying to paparazzi. Watch the video below:

On a related note, netizens went down the memory lane when Akshay Kumar posed with veteran actress Rekha along with wife Twinkle Khanna. Akshay and Rekha featured in 1996 film Khiladiyon Ka Khiladi. Another highlight of the wedding bash was Natasha Dalal who accompanied Varun Dhawan's parents- David Dhawan and Lali Dhawan. Varun, who is in London for the shooting of Street Dancer missed the bash. Speculations are rife that Varun and Natasha will soon tie the knot and this photo just came in as a confirmation. 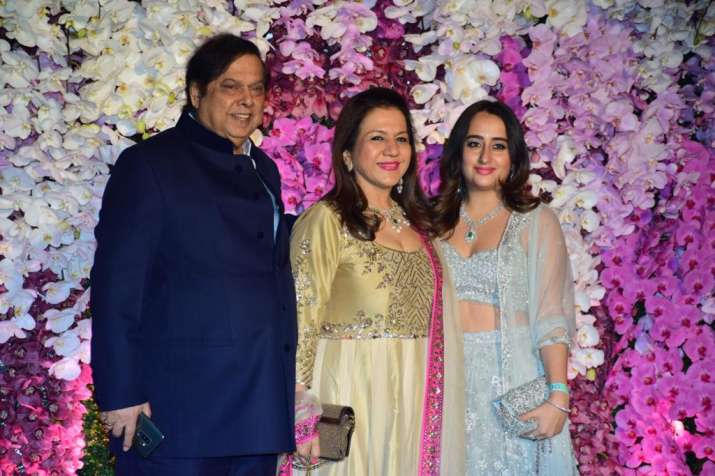 Akash and Shloka tied the knot in a dreamy wedding ceremony on March 9 which was attended by several national and international celebrities. From former UN Secretary-General Ban-Ki-Moon, ex-British PM Tony Blair and Google CEO Sundar Pichai to Bollywood stars and cricketers, the wedding was graced by several big names. Everyone arrived in their ethnic best. SRK, Ranbir, Karan Johar even danced in the baraat along with the groom.