Finance Minister Piyush Goyal, on Friday, presented Narendra Modi-led NDA government's Interim Budget 2019 in Parliament amidst a lot of hopes and expectations from across the spectrum of society-right from the common people to industries.

With the Lok Sabha elections 2019 only a few months away, the Budget, the last financial exercise by PM Modi led Central government was, presented in the Lower House by Goyal. The govt announced major tax benefit for the middle class. It also provided further relief to the farmers.

"Individuals with income up to Rs 5 lakh will not be required to pay any tax," Goyal said.

He said with this, individuals who are earning gross income of Rs 6.5 lakh per year and have made investments in savings instruments, will be exempt from paying income tax.

"This will provide benefit of Rs 18,500 to 3 crore middle class taxpayers self employed, senior citizens," he said, adding the number of beneficiaries will go up for those who have made investments in mediclaim and pension.

No tax will be deducted on interest earned on bank and post office deposits of up to Rs 40,000 annually, up from Rs 10,000 currently.

Goyal also proposed that benefit of rollover of capital tax gains be increased from investment in one residential house to that in two residential houses, for a taxpayer having capital gains of up to Rs 2 crore.

However, it can be exercised once in a lifetime, he added.

The Income Tax department will move towards faceless assessment and verification of returns, Goyal said Friday.

Standard deduction has been raised from Rs 40,000 to Rs 50,000 which will benefit three crore salaried individuals. 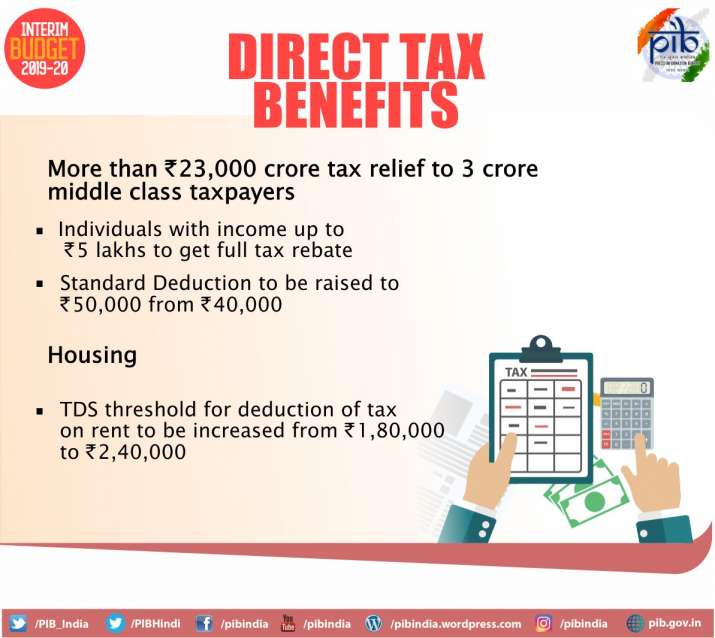 Finance Minister also announced an increase in defence budget to over Rs 3 lakh crore in 2019-20.

Presenting the Budget for 2019-20 in the Lok Sabha, Goyal also said Rs 35,000 crore has been given under OROP in the last three years.

Announcing substantial hike in military service pay, the finance minister said defence budget has been increased to over Rs 3 lakh crore in 2019-20.

He also said the government will launch a mega pension yojna for 42 crore unorganised sector workers and assured monthly pension of Rs 3,000 after reaching age of 60 years.

On railways, he said its capital expenditure programme will be at an all-time high of Rs 1.58 lakh crore in the next fiscal.

"We have eliminated all unmanned railway crossings in the country," he added

The finance minister also said the Vande Bharat Express will provide speed, service and safety to citizens and will give boost to Make In India.

Commenting on construction of rural roads, he said it has tripled road construction and out of total 17.84 lakh habitations, 15.8 lakh were connected with pucca roads under PMGSY. PMGSY allocation for 2019-20 is pegged at Rs 19,000 crore, he said.

Meanwhile, the Interim Budget's proposal to give full rebate to tax payers having annual income up to Rs 5 lakh and a farm package boosted the Indian equity market during the mid-afternoon trade session on Friday.

Observers took note of few key points in the Interim budget like sops to small farmers and announcement of a higher tax exemption limit as key factors which led to the market's rise.

According to HDFC Securities Deepak Jasani, the push to consumption by way of sops to farmers and middle class families resulted in buying in auto and FMCG stocks.

Sensex and Nifty advanced as Finance Minister Piyush Goyal presented the Interim Budget for 2019-20 in the Lok Sabha on Friday.

Sector-wise, healthy buying was witnessed in the auto, FMCG and capital goods stocks.

"For the market it will provide a good signal in the short term since the Interim Budget will not trouble the economic accountancy and populist agenda," said Vinod Nair, Head of Research, Geojit Financial Services.

Jasani added that the farm package had come in at a figure less than what most people "expected or feared" and the fact that the fiscal deficit for FY20 had been kept at 3.4 per cent "will create mixed feelings".