How could coronavirus outbreak in China, if not contained now, imperil India’s economic recovery?

As India faces a challenging economic situation, having experienced six successive quarters of negative GDP growth, a disruptive shock in supply chains from a major economic partner like China will only compound economic woes

It is almost two months now since the first case of the novel coronavirus (2019-nCoV) surfaced in China’s Hubei province. Since December, the death toll on account of the coronavirus has risen to 1,380 in China alone, with three more deaths reported outside the mainland—one each in Hong Kong, the Philippines and Japan. More than 65,000 persons across 25 countries have contracted the infection, as the World Health Organisation (WHO) warned that the outbreak poses a “grave threat” to the world.

If the n-CoV continues to wreak havoc over the next quarter as well, then it risks disrupting global supply chains, affecting all the major economies, including India. The ominous revelations have been published in a report by premier ratings’ agency India Ratings and Research (Ind-Ra).

“In case the virus is transmitted over the next three to four months, the extent of supply chain disruptions globally could be higher than that during the 2003 SARS outbreak,” says the report by the Mumbai-based agency.

Indian industries which are at maximum risk

The vulnerability of any industrial sector to the outbreak directly depends on how deeply intertwined it is with Chinese supply chains. The economic disruptions from resulting closures in major Chinese cities have already forced Ind-Ra to revise it's Gross Domestic Product (GDP) growth projections for China from 5.90 per cent to 5.50. If the virus continues to spread, the “worst-case scenario” prediction for economic growth is 5.2 per cent.

Naturally, India, whose bilateral trade with China stood at $87.1 billion in 2019, will feel the repercussions in case the outbreak isn’t contained soon enough.

According to the National Investment Promotion and Facilitation Agency, India is the seventh-largest export destination for Chinese products. Before the outbreak, both the nations were optimistic about the trade figure touching a record high of $100 billion in 2020.

Having said that, certain Indian industries could be severely affected by the outbreak over the medium to long term.

Ind-Ra warns in its report that India’s thriving pharmaceutical industry will feel the heat of the unfolding events next door in China, if the situation exacerbates or is not contained in time.

“Several Indian industries have a significant direct dependence on supplies from China,” according to the findings.

The supply of raw materials from China, including antibiotics, activated pharmaceutical ingredients (APIs) and fertilizers, will have “far-reaching economic consequences” for India.

According to a government agency, India is the largest provider of generic medicines globally, occupying a 20% share in global supply by volume. A report by McKinsey and Co predicted India’s pharmaceutical industry to grow to $55 billion by 2020.

All this put together could further worsen the recovery in industrial production over the near to medium term,” Ind-Ra has predicted, adding that such a disruption isn’t a “base case scenario.”

Credits in certain sectors on negative outlook, such as ancillaries, could be affected as well, predicts Ind-Ra.

Not only the industries which rely on Chinese raw materials to sustain themselves, but even India’s exports to the world’s second-largest economy risk being severely affected in case of a prolonged outbreak.

As of 2019, India exported approximately $17 billion worth of goods to China. 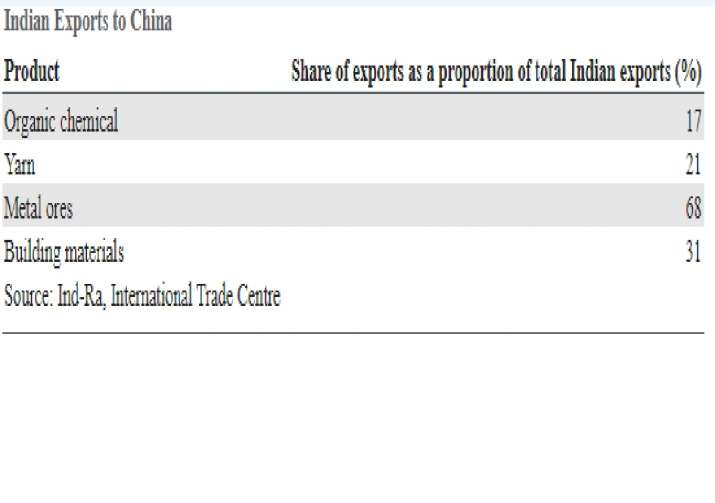 “Indian exports could be affected at two levels – first, by way of a slowdown in Indian exports to China and second, as global demand recovery remains lacklustre,” Ind-Ra says in its report.

India accounts for nearly 16 per cent of China’s cotton imports and 13 per cent of its construction material imports.

As India faces a challenging economic situation, having experienced six successive quarters of negative economic growth, a disruptive shock in supply chains from a major economic partner like China will only compound economic woes.

Further, China is a major supplier of credit globally. The National Bureau of Statistics of China reported an outflow to the tune of $143 billion from China in 2018, second only to Japan.

While India’s vulnerability to Chinese FDI inflows is relatively low, there have been instances of Chinese investment routed through third countries, in which case a prolonged coronavirus outbreak will have sizable consequences for the Indian economy.